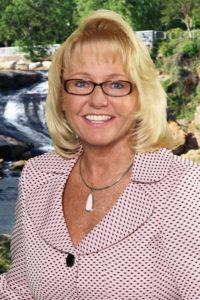 So many aspects of life change when you have a child. Debbie Cooper, United Ministries’ (UM) board member of 4 years, says that her career ambitions completely altered while raising her first child. After working in a for-profit business for years, her perspective was adjusted as she realized that she “wanted to make a difference in the community” to better the world for her family and for future generations. She began working at an organization that prevented child abuse, and later joined the Community Foundation of Greenville, where she has now been for 20 years as the Director of Donor Services. At the Community Foundation she serves Greenville by “helping people locate philanthropic-placed investments,” which can help fund life-changing programs for the Greenville community.

UM first intrigued Debbie due to its focus on homelessness in the community. During her year in an initiative led by Leadership Greenville, she worked with her team to help improve United Ministries’ Place of Hope day shelter for the homeless. Debbie had also been a board member at GAIHN, Greenville Area Interfaith Hospitality Network, for years, so she became more immersed with United Ministries once the organizations merged. Debbie was incredibly supportive of the “joining together” and became impressed with how UM handled the changes. She believes that both the directors and the board were very open with funders, which she believes is key in a time of transition.

Being a board member with both GAIHN and UM has enlightened Debbie on the details of community issues. She “knew that [homelessness] was a problem, but [the organizations] made it personal” for her. Being able to talk frankly about homelessness has brought the details of the housing crisis “into reality” for Debbie, and she believes that UM has grown into a nonprofit that can create positive change for the homeless population and beyond. Debbie points out how UM’s reputation has shifted through the years. Once seen mostly as a place to send people for emergency assistance, UM has leaned into focusing more on long-term solutions that can assist everybody in the Greenville community. Debbie looks forward to UM’s growth in the coming years and hopes that the work here can help eradicate homelessness for good.