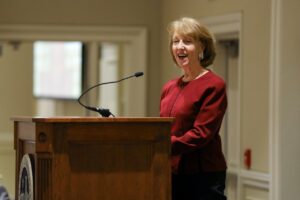 Reverend Deb Richardson-Moore believed that “God was calling [her] into ministry” when she left her 27-year career as a reporter to get her Master of Divinity. There, she became “just mesmerized” by the Bible and got connected to more faith-based organizations in the Greenville area, including being on the Board of Directors at United Ministries. As a woman in ministry, she experienced rejection from many churches after getting her degree and ended up applying for and getting the role of Pastor and Director at Triune Mercy Center, a mission church near downtown Greenville.

Getting acquainted with her new role meant taking time to see what could be improved upon. As Deb saw more and more people come in with addiction issues, she and the staff began to “build up the church and added mental health care, addiction treatment, and legal aid.” This was a place for worship, but also became a place where anyone was welcome and anybody could come in to receive support. Deb also saw that “’the main thing missing [at Triune] was a sense of community,” so staff and volunteers worked on “turning strangers into welcome community members.” This meant having people who came in for assistance and having middle class folk who came in for worship begin to see each other as people of one shared community. It also meant that Deb began preaching more about addiction and was more intentional about supporting strangers to become part of Triune’s community.

Aside from being friends with people on staff at United Ministries (UM), Deb has also worked with and alongside us to help create a better community. Both she and staff from UM have worked together to create the Greenville Homeless Alliance, which educates people about and advocates for people experiencing homelessness. Deb has gone with our staff to other organizations to see how they function, as well as personally having participated in UM’s Transformation Walk fundraiser. Finally, the social workers at Triune and UM staff often work with one another when it is for the good of a participant, such as a participant going to Triune for their basic needs and being sent to UM to work towards saving for permanent housing. Deb has recently retired but has learned so much from her many years as Pastor. She says that “the reason Greenville works so well is that many of us are friends,” and that is shown in her commitment to make both Triune’s congregation and nonprofit partners members of a shared community.