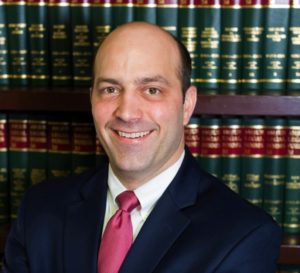 There’s possibly nothing more fun than an impromptu dance party, especially when it’s composed of kids of all ages letting loose and enjoying good music. Hunter Reid experienced such a night when he brought his own children to spend time with the kids in our Interfaith Hospitality Network (IHN), while they were staying at Buncombe Street United Methodist Church for temporary shelter. As the former IHN coordinator of his congregation, Hunter has been able to get to know the families his church was hosting through IHN quite well. On this particular night, he says that his outdated dancing skills were “no match against these kiddos,” and everyone got lost in the moment and forgot about the housing crises that brought the families to IHN.

Hunter was born and raised in Greenville, a community that he credits with forging a “strong calling towards civic responsibility.” This calling also guides his professional life — as a lawyer he mostly represents people who are suffering because of an injury or divorce.  The way Hunter sees it, “my job is to fight for what’s right or what ought to be right, and to give people a voice when they’ve been disregarded or neglected.”  Outside of work, he enjoys “helping” raise two kids and attending Buncombe Street. Through his congregation, he began volunteering with IHN in 2010 and “quickly caught the bug. [He] had so much fun and started volunteering more and more.” Not long after, he became the main IHN coordinator, meaning that he worked with United Ministries’ IHN staff to set up his church to host three or four families experiencing homelessness, about four times a year. “The coordination was fantastic,” Hunter says. “The IHN staff do such a good job preparing you.” In this role, Hunter formed a deeper relationship with all the families he stayed with for those weeks.

As the coordinator, he also worked with all the volunteers from his church who wanted to assist IHN. Although Hunter did need to do some recruiting, he said that Buncombe Street members “stepped up to the plate” and always created a hospitable and warm atmosphere for the families coming in as their “guests.” Hunter’s favorite part of his five years of coordination was getting to know the families more – sometimes a family would be completely new to IHN when staying at Buncombe Street, and he enjoyed acting as a host and a friendly supporter for them.  For anyone thinking of becoming an IHN volunteer, Hunter emphatically expresses that “you don’t know what you’re missing! Come on in.”