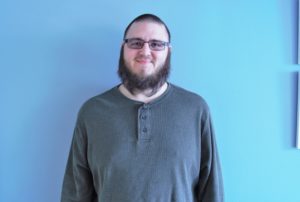 “When you come back through the door it’s like they just saw you yesterday.”

These are the words of Jeremy, a United Ministries (UM) participant, describing our staff. Jeremy first walked into our building 10 years ago, when he heard about our Adult Education (AE) program through word on the street. He decided to try our services in order to get his GED after he had dropped out of high school not long before. Jeremy had previously attempted to pass his GED by attending a more traditional GED class, but this type of learning was too impersonal for him, causing him to look elsewhere. After coming to United Ministries and experiencing our tutor-based program, he passed the exam in less than three months! Jeremy explains that UM was a better environment for him since “everyone was so nice here [and he] likes the fact that [the tutors] work with you one-on-one.”

Feeling accomplished and comfortable with the staff in AE, he came back after acquiring his GED and confided that he was let go from his job. The AE staff quickly connected him with our Employment Readiness (ER) program, which in turn connected him with a maintenance company that hired him. Jeremy then furthered his work experience by working with both UM and Greenville Tech to acquire a mechatronics degree by attending an intense 40-week program. During this program, Jeremy was able to get to and from class by using the gas gift cards provided to him by UM. After getting his degree, Jeremy’s employment options expanded substantially. Jeremy is grateful for the opportunities opened up to him through UM and shared that he “feels like if [he’d] never come here, [he] wouldn’t have gotten [his] GED or any of the jobs that [he’s] had.”

Jeremy has had various levels of luck with his employment since first coming to ER. He enjoys the travel that is provided through many maintenance jobs and is quick to get along with just about everyone he works with. However, he has experienced layoffs from some positions when contracts end but knows that he can come back to UM to connect with his next employment opportunity. Jeremy has wonderful memories with staff and stresses that he can rely on them to help him out whenever he needs some support. He has become especially close with Ethan Friddle, UM’s Director of Programs and Operations, who Jeremy says “was there every step of the way” during the journey to financial self-sufficiency. We all love seeing Jeremy stop by with his friendly greetings and are excited to see where his career takes him next!