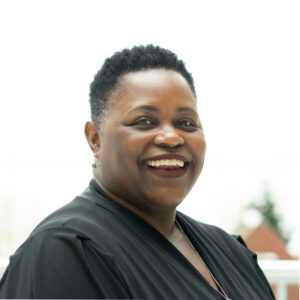 JoKeitha Seabrook is “a server of people,” a role that she has incorporated into her professional life. She has been working at the United Way of Greenville County (UWGC) for 9 years, after working in both banking and for the local government. Recently, she has stepped into the position of Associate Vice President of Community Impact at UWGC, a role she is very excited to embrace after working in community engagement there for years. She sees her role at UWGC as one that “helps people who need a helping hand and give hope” to them. As the Vice President, she focuses more on overseeing the work of others, something that was hard to do at first since she knows that “you can’t be the coach and the individual player” when being hands-on with serving the community. Instead, she now focuses more on encouraging other employees, putting out fires when they arise, and delegating the work that goes along with her own projects.

JoKeitha’s favorite part of her job is interacting with people, something she gets to do within UWGC as well as with partner organizations, including with United Ministries (UM). The two organizations’ partnership is one that has originated from UWGC being one of United Ministries’ biggest funders, but JoKeitha stresses that it’s “more than a transactional relationship.” It is a give and take relationship, one where UM’s staff can lend expertise about GEDs and what barriers need to be given more focus in Greenville, while UWGC provides resources and has staff that is always asking, “What can we do to lend a hand?” Additionally, United Way provides members from their AmeriCorps program as temporary staff at UM, who help with both capacity building and working one-on-one with participants in need of support.

JoKeitha has personally enjoyed working with our staff as well, with one particular memory sticking out. When she had a client who was in need of multiple resources and assistance, she gave Davida Bryant, Program Manager of UM’s Emergency Assistance (EA) program, a call. Davida took the time to walk her through the step-by-step process for EA, as well as followed back up with JoKeitha to assure that the client got the help they needed. JoKeitha was impressed by the holistic response from both Davida and the organization, and says that moments like that make her “excited for what the future holds” for the partnership, both through COVID-19 and beyond.