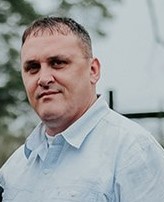 “All I needed was to get another chance,”

Tony Knight, one of United Ministries’ (UM) GED graduates, says about passing the GED exam. Tony had dropped out of school in 9th grade after finding little encouragement to stay in the school system. He says, “I didn’t think I needed it. I was young and I thought I knew it all,” so he joined the Job Corps instead of completing high school. A couple of decades later, Tony realized he was “maxed out” at his job, unable to get any more raises and without any money saved up for retirement. This was the push he needed to decide to get his GED. Before coming to us at UM, Tony attempted to earn his certificate through a classroom-based GED program. This style of learning was unhelpful for him; luckily, he then heard about UM from a friend and drove with them to us.

Once here, Tony realized that the one-on-one tutoring style was a tremendous help to him understanding the GED subjects. Even though he was not a fan of math, Tony says that “one volunteer loved math so much that her loving it really helped me.” Even when here, it was far from a piece of cake for Tony. He knew “a guy who made fun of [him] for wanting to go back to get [his] GED.” As it turns out, that same guy realized the financial benefits of having a High School Equivalency Diploma after Tony explained why he was coming here and ended up applying to our program himself. Tony says that he and that man ended up passing the exam on the same day! After about four months, Tony passed the exam, obtained his GED, and couldn’t be happier. “It was the best feeling,” he says. “I was celebrating for six months – maybe a year. It’s just a great feeling.” Afterwards, Tony got a new job at Michelin where he has the opportunity to earn raises every year. He believes that his life has truly benefitted from pursuing further education and is passionate about encouraging his friends to come to UM if they’d benefit from our program too.