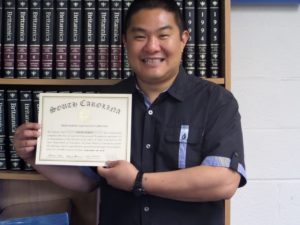 “I was stuck in life and United Ministries got me un-stuck.”

So says Young Ghun, who graduated with his GED in September 2018 and is now enrolled at Bob Jones University (BJU), pursuing a degree in Cinema Production. Young came to United Ministries after following the advice of a concerned friend and traveling almost 2000 miles from Durango, Colorado to participate in Miracle Hill’s Overcomers program for addiction recovery. When the Overcomers staff learned that Young hadn’t completed high school, they referred him to United Ministries to prepare for the GED.

Young was initially hesitant to enroll in a GED program. After all, he had missed graduating from high school by just a few credits and had even completed a semester of classes at UCLA before discovering that his high school transcripts were incomplete. He was eager to move forward in life and starting a GED program seemed like taking a big step backward.  Why should he repeat all of high school? Why not just make up those few missing credits?

And then Young learned how United Ministries’ GED program works. Contrary to what he’d assumed, he wouldn’t need to take classes and study all those high school subjects again. He’d just need to prove that he was capable of passing the GED tests.  And, as Young soon established, he was more than capable. Less than a month after enrolling, Young had his high school diploma in hand.

This was not the end of Young’s involvement with United Ministries.  After completing the Overcomers program, he decided to stay in Greenville for another six months as a Miracle Hill Ministry Trainee. Young soon observed that some of the Overcomers he supported were struggling with their schoolwork. Sensing a niche he could fill, he spoke with GED program staff about tutoring at the Overcomers residence. The staff provided Young with a set of books and a calculator, and his transition from participant to volunteer was complete.

The agency’s annual GED Graduation ceremony in March 2019 offered another window into Young’s talent. GED staff learned that Young enjoyed singing and invited him to sing at the ceremony.  What no one knew at the time was that Young was an experienced performer. He previously worked in the film industry in L.A. and had honed his skills in front of an audience as a karaoke host in clubs. Not surprisingly, Young was a crowd pleaser at graduation.

Young is now gearing up for a year of new challenges. In addition to studying at BJU, he’ll be working full time as a residential counselor at Copper Line, a Miracle Hill program in Spartanburg for formerly homeless men transitioning from the Spartanburg Rescue Mission to more independent living. Although he’s not sure where all these experiences will lead him, he says his faith has taught him that his job is simply to “show up” with all that he has and let God take care of the rest.  Wherever he lands next, we’re glad Young decided to show up at United Ministries!